Michelle Rodeh B.Sc.(Hons.) DMU (Vasc) is the sonographer in charge at Precision Vascular Ultrasound. She became accredited in 1998. She has been scanning for 27 years working both in Radiology in hospitals and private practice and for the Vascular Surgeons in Melbourne. She is an expert in all aspects of Vascular Ultrasound. She has set up and run two vascular laboratories successfully. Michelle has taught and trained vascular ultrasound to trainee sonographers and experienced sonographers to maintain the standard of vascular ultrasound.

She is a DMU examiner for the Australian Society for Ultrasound for Medicine (ASUM) and has been for about 15 years. This has involved travelling around Australia and New Zealand to examine the trainee sonographers to gain accreditation.

She has been active on the Australian Sonographer’s Association (ASA) Victorian branch for 7 years where she organized Vascular workshops which she ran. This involved giving informative powerpoint presentations and scanning for her fellow sonographers to improve their skills and knowledge.

She has been on the National Conference committees for both ASUM and ASA running the vascular components and contributing by speaking and running workshops. 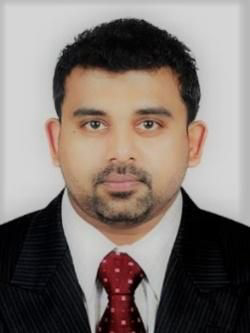 Mukesh Edward is a senior vascular sonographer in Precision Vascular Ultrasound (PVU) experienced in all ranges of vascular studies including intra-operative procedures, trauma and emergency departments. He has extensive ultrasound clinical experience both in in tertiary public hospitals and the private sector. He has experience in tutoring and mentoring emergency medical professionals and ultrasound trainees.

He is an overseas trained and qualified medical post graduate (verified by Electronic Credentials for Foreign Medical Graduates EPIC USA and Australian Medical Council). The special interest in anatomy and imaging has paved the pathway to ultrasound career in 2005. He initially completed the post graduate program (PGPMU)in medical imaging from Australian School of Medical Imaging, Sydney and is qualified with the DMU (Vascular) from the Australasian
Society for Ultrasound in Medicine.